By now it is becoming quite clear that the billions of dollars in government incentives to get physicians using electronic health record solutions has moved the market. According to an article in Healthcare IT News, 77 percent of docs practicing in free-standing physician offices have an EHR installed. The news is even better for hospital-owned practices where 90 percent of docs are now off paper records and are using an EHR in clinical practice. It appears that most of the holdouts will continue to hold out either because they view the transition to electronic records too costly, despite the incentives, or they plan to retire or leave practice within the next 5 years. The report also suggests that Stage 2 meaningful use attestation is losing steam with just 1898 out of 537,000 eligible professionals taking the time and effort to report. Frankly I’m not at all surprised. The complexity of meaningful use attestation is to my mind worse than preparing for a tax audit. Practicing medicine (and getting paid for what you do) is complicated enough these days without adding even more hassle to running a medical office. 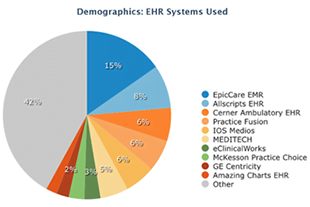 According to data from the ONC, there are now approximately 1000 certified ambulatory EHR solutions in the marketplace. Although about half of the market goes to a dozen or so vendors, one could argue if having that many solutions on the market is a good thing or a bad thing. Frankly, every time I get a call from an entrepreneur or a physician who claims to have invented the world’s next best EHR I want to scream, “Stop the insanity.” No wonder solving for Health Information Exchange (HIE) is such a mess.

If there is a silver lining in all of this, perhaps it can be seen in another report that caught my attention today. This one comes from EHR selection group Software Advice in collaboration with Research Now. It clearly shows that EHR solutions that place an emphasis on mobile are winning the hearts and minds of physician users. According to a survey of approximately 600 physicians from a diverse range of medical specialties and practice sizes, mobile users reported higher levels of satisfaction and fewer challenges with their EHR than non-mobile users. Investing more in patient portals was also a top priority for most users, partially due to the need to improve patient engagement. Not surprisingly, the report also shows that over half of users were having difficulty integrating data from external systems with the EHR solution they were using.

Back on the topic of mobility, although just 26 percent of survey respondents said they were using a mobile device (tablet or smartphone) in clinical workflow, 58 percent of those who accessed their EHR from a mobile device were “very satisfied” with their EHR compared to 28 percent of non-mobile users. They also reported fewer problems with their EHR decreasing productivity and with difficulties associated with learning how to use the solution. I’m not at all surprised by this. After all, doctors (and nurses) are highly mobile professionals. To my way of thinking an EHR solution that does not champion mobility is not a solution at all. I think we’ll be saying the same for EHR solutions using “cloud” in short order. 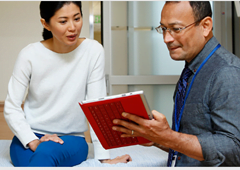 Next week I’m heading to Boston where I am very much looking forward to an event we are hosting for a select group of clinicians. The event, sponsored by our Surface Pro 3 team, is going to be a great opportunity to hear directly from my physician colleagues what they like, and perhaps what else we might need to do, to make the Surface Pro 3 even more compelling to mobile healthcare professionals. I’ve already gone on record by saying that the Surface Pro 3 is the best computing device (mobile or not) that I have ever used. It’s no wonder that some of the nation’s most prestigious hospitals and health systems are gobbling them up right now. And if not the Surface Pro 3, they are buying among the dozens of attractive mobile devices for clinical computing from our OEM partners such as Dell, Lenovo, HP, Panasonic, Acer, Asus, Motion, Advantech, and others.

As stated in yet another recent article by Healthcare IT News, Is the post-ERH era upon us?, “There’s a point where providers shift from installing the technology to really making it work, and work well”. I agree that we are just about there.